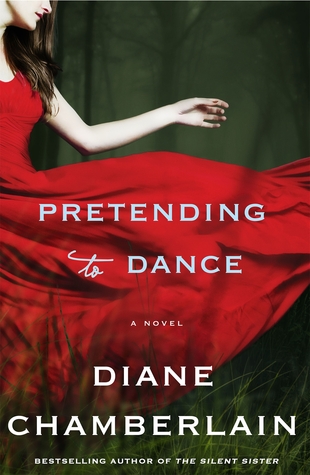 Diane Chamberlain novels are my guilty pleasure. There. I’ve said it. I discovered her about two years ago with Necessary Lies and I have been shamelessly devouring her books ever since. It’s chick-lit, it’s reasonably sappy, and it’s nothing I would ever picture myself enjoying. But, for some reason, I do. Pretending to Dance is Chamberlain’s latest effort, and while it’s not my favorite, it doesn’t disappoint.

Molly Arnette and her husband are trying to adopt a child, and the unexpected stir of emotions causes Molly to delve into the troubled past that she thought was behind her. Chamberlain expertly crafts a tale full of family secrets, neurological disorders, open adoptions, and all kinds of Oprah-worthy drama. It is not uncommon for Chamberlain to include a number of controversial issues, but for some reason it just feels a little strained here.

The novel toggles between Molly’s life as an increasingly angsty fourteen-year-old and present day as she and Aidan prepare for the adoption. SPOILERS AHEAD. You have been warned. Molly cut off her family following the tumultuous summer that her father, Graham, died from complications of MS. Molly always suspected that her mother, a pharmacist named Nora, was responsible. Here’s where things get hairy. Nora is not Molly’s biological mother. That would be Amalia, Graham’s former lover who lives in the small, small town that is strictly inhabited by Graham and his mother and his siblings. And, of course, his aforementioned former lover who handed over a two-year-old Molly when she no longer felt capable of caring for her. Graham and his then-new wife, Nora, took in Molly, who was raised pretty much aware of the situation, but not aware of how bizarre the whole thing was.

The entire novel hints at this massive secret being kept by the abandoned family, but really the secret only amounted to the fact that while Nora played a part in Graham’s death, so did that entire extended family. Everyone knew and everyone helped a little so that not one person would be solely responsible. I didn’t find this all that shocking, but I got the vibe that I was supposed to. Oh well.

Pretending to Dance, then, falls pretty much in the middle of Diane Chamberlain’s novels in terms of quality. It’s better than mehh because I was still invested and intrigued by the characters, and Chamberlain has a knack for totally immersing readers in the world that she creates.

The Cabin at the End of the World by Paul Tremblay

A Beautiful Maui – The Truth Behind Moana

Beauty and the Beast – A Troublesome Viewing Experience